How engaged are Wikipedia users? 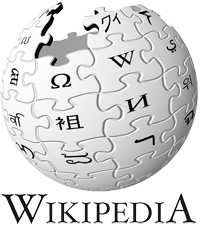 Recently, we were asked: “How engaged are Wikipedia users?” To answer this question, we visited Alexa, a Web Analytics site, and learned that Wikipedia is one of the most visited sites in the world (ranked 6th), that users spend on average around 4:35 minutes per day on Wikipedia, and that many visits to Wikipedia come from search engines (43%). We also found studies about readers’ preferences, Wikipedia growth, and Wikipedia editors. There is however little about how users engage with Wikipedia, in particular about those not contributing content to Wikipedia.

Can we do more?

Beside reading and editing articles, users perform many other actions: they look at the revision history, search for specific content, browse through Wikipedia categories, visit portal sites to learn about specific topics, or visit the community portal. Although discussing an article is a sign of a highly engaged user, performing several actions within the same visit to Wikipedia is also a sign of a highly engaged user. It is this latter type of engagement we looked into.

We collected 13 months (September 2011 to September 2012) of browsing data from an anonymized sample of approximately 1.3M users.  We identified 48 actions such as reading an article, editing, opening an account, donating, visiting a special page. We then built a weighted action network: nodes are the actions and two nodes are connected by an edge if the two corresponding actions were performed during the same visit to Wikipedia. Each node has  a weight representing the number of users performing the corresponding action (the node traffic). Each edge has a weight representing the number of users that performed the two corresponding actions (the traffic between the two nodes).

We use the following metrics to measure engagement on Wikipedia based on actions:

We calculated these metrics for the 13 months under consideration and plotted their variations over time. An increase in TotalNodeTraffic means that more users visited Wikipedia. An increase in TotalTrafficRecirculation means that more users performed at least two actions while on Wikipedia, our chosen indicator of high engagement in Wikipedia. We observe that TotalNodeTraffic increased first then became more or less stable. By contrast, TotalTrafficRecirculation mostly decreased, but we see a small peak in January 2011. 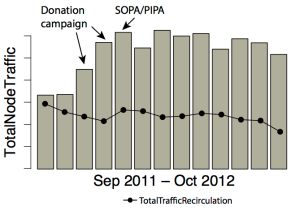 Two important events happened in our 13-month period. During the donation campaign (November to December 2011) more users visited Wikipedia (higher TotalNodeTraffic value). We speculate that many users became interested in Wikipedia during the campaign. However, because TotalTrafficRecirculation actually decreased for the same period, although more users visited Wikipedia, they did not perform two (or more) actions while visiting Wikiepedia; they did not become more engaged with Wikipedia. However, during the SOPA/PIPA protest (January 2012), we see a peak in TotalNodeTraffic and TotalTrafficRecirculation. More users visited Wikipedia and many users became more engaged with Wikipedia; they also read articles, gathered information about the protest, donated money while visiting Wikipedia.

People behave differently on weekdays compared to weekends. The same happens with Wikipedia.

So which actions became more frequent as a result of the donation campaign? As expected, we observed a significant traffic increase on the “donate” node during the two months; many users made a donation. In addition, the traffic from some nodes to other nodes  increased but only slightly. Additional actions were performed;  for instance, more users created a user account, visited community-related pages, all within the same session. However, overall, users mostly performed individual actions since TotalTrafficRecirculation decreased during that time period.

So the campaign was successful in terms of donation, but less in terms of making Wikipedia more engaging.

This is a write-up of the presentation given by Janette Lehmann at TNETS Satellite, ECCS, Barcelona, September 2013.